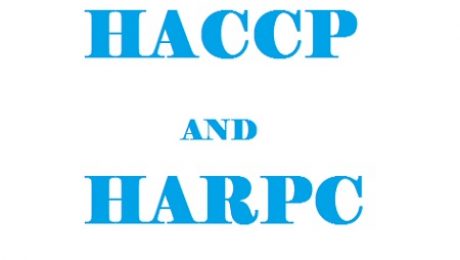 Both Hazard Analysis and Critical Control Points (HACCP) and Hazard Analysis and Risk-Based Preventive Controls (HARPC) are discussed, almost interchangeably, albeit incorrectly, in food-processing circles. The truth is that if you were to ask most food processing professionals to explain the differences between the two, the answer may not come so easily.

HACCP is a global standard, developed in the late 1950s and early 1960s by a team of engineers and scientists from three distinctly different organizations. Pillsbury, the Army’s Natick Research Labs, and the National Aeronautics and Space Administration (NASA) joined forces to draft and adopt a global, food-safety standard in keeping with, and as part of, the Codex Alimentarius. The Codex commission was established by the Food and Agriculture Organization of the United Nations (FAO) and the World Health Organization (WHO) in 1963. HACCP was originally developed as a way to ensure built-in quality and food safety, specifically for the manned space program, though it has evolved greatly since that point in time.

HACCP’s evolution has been continual, resulting in an effective and efficient, comprehensive food-safety management system (FSMS). Pillsbury publicly presented the HACCP concept at the 1971 National Conference on Food Protection, jointly sponsored by the Food and Drug Administration (FDA) and the American Public Health Association (APHA). In 1974, the FDA incorporated its concepts into its low-acid and acidified-food regulations. By the end of the 1980s, McDonald’s started requiring all of its suppliers to adhere to HACCP in order to ensure the safety of the food being served in its restaurants. Spurred by the marketplace, rather than legislation or regulation, other large companies followed suit and HACCP became the standard by which to measure food safety.

In 1989, the National Advisory Committee on Microbiological Criteria for Foods (NACMCF), published the first official HACCP document, standardizing the practice and presenting the seven principles of HACCP: (1) Hazard Analysis, (2) Critical Control Point Identification, (3) Establishment of Critical Limits, (4) Processes for Monitoring, (5) Corrective Actions (6) Record Keeping, and (7) Establishment of Verification Procedures . The rest, as they say, is history.

Moving forward, HARCP is not a global standard, but an updated U.S. standard incorporated into the Food Safety Modernization Act (FSMA) on July 4, 2012. Whereas HACCP generally applies to low-acid, canned food, juice, and seafood processors, HARPC applies to almost all food-processing facilities. The only facilities not required to comply with HARPC are those subject to the Standards of Produce Safety, those already governed by HACCP, and those facilities regulated by Good Manufacturing Practices (GMP) for Dietary Supplements. Small and very small business entities, as defined by the FDA are also exempt.

Finally, unlike HACCP, HARPC includes planning for potential terrorist acts and/or intentional adulteration and food fraud. A facility’s HARPC, food-defense plan should include additional security, such as visitor access and control.To put it even more simply, if you have an effective HARPC plan in place, you are also in compliance with HACCP mandates. If, however, you currently function under HACCP guidelines, it is your responsibility to determine if you must comply with HARPC under FSMA.

This website uses cookies to improve your experience while you navigate through the website. Out of these, the cookies that are categorized as necessary are stored on your browser as they are essential for the working of basic functionalities of the website. We also use third-party cookies that help us analyze and understand how you use this website. These cookies will be stored in your browser only with your consent. You also have the option to opt-out of these cookies. But opting out of some of these cookies may affect your browsing experience.
Necessary Always Enabled

Performance cookies are used to understand and analyze the key performance indexes of the website which helps in delivering a better user experience for the visitors.

Analytical cookies are used to understand how visitors interact with the website. These cookies help provide information on metrics the number of visitors, bounce rate, traffic source, etc.

Advertisement cookies are used to provide visitors with relevant ads and marketing campaigns. These cookies track visitors across websites and collect information to provide customized ads.

Other uncategorized cookies are those that are being analyzed and have not been classified into a category as yet.